The book by Armando Cesari - Dedicate to Mario Lanza

The book by Armando Cesari 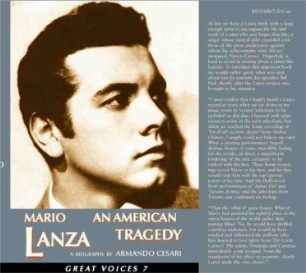 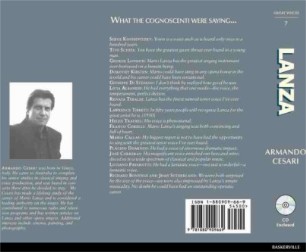 Mario Lanza: An American Tragedy
A Book by Armando Cesari

Baskerville Publishers is proud to announce publication of this long-awaited original biography of the 20th century's greatest tenor, Mario Lanza, on November 2, 2003 at the Mario Lanza Ball in Philadelphia. The preface was written by Placido Domingo. This volume will contain a CD that includes recordings of Lanza live on stage and rehearsing at home. The author interviewed most of Lanza's associates and fellow artists over a period of more than thirty years. Place advance orders (ISBN:1-880909-66-9) at orders@www.baskervillepublishers.com or call 1-866-424-8466.

"Yours is a voice such as is heard only once in a hundred years."
- Serge Koussevitzky

"You have the greatest given throat ever heard in a young man."
- Tito Schipa

"Mario Lanza has the greatest singing instrument ever bestowed on a human being." - George London

"Mario could have sung in any opera house in the world and his career could have been sensational."
- Dorothy Kirsten

"I don't think he realised how good he was." - Giuseppe Di Stefano

"He had everything that one needs- the voice, the temperament, perfect diction." - Licia Albanese

"In fifty years people will recognise Lanza for the great artist he is."
- Lawrence Tibbett (in 1950)

"His voice is phenomenal." - Helen Traubel

"Mario Lanza's singing was both convincing and full of heart." - Franco Corelli

"He is Caruso's successor." - Maria Callas

"He had a voice of enormous dramatic impact."
- Placido Domingo

"His magnificent voice enriched our lives and introduced us to a wide spectrum of classical and popular music." - José Carreras

"We were both surprised by the size of the voice--we were also impressed by Lanza's innate musicality. No doubt he could have had an outstanding operatic career." - Richard Bonynge and Joan Sutherland