Mario Lanza’s repertoire was vast and the recorded documents he’s left behind show his incredible capability to adapt his voice to various musical genres.
Besides the various characters of the major lyric operas, Mario proved his worth in operetta, musicals, gospel and popular American, English, Italian and Spanish songs, including of course, the famous Neapolitan songs in the repertoire of the great Enrico Caruso, Beniamino Gigli and Giuseppe Di Stefano. There were five hundred tracks in only 12 years. A true record!!!
In the USA he made five films of great success. By date:
1949 That Midnight Kiss
1950 The Toast of New Orleans
1951 Because You’re Mine
The Great Caruso
1956 Serenade
In Italy he made two films, “Arrivederci Roma” in 1958 with Reggie Castle and “Come Prima”, his last film, in 1959 with Zsa Zsa Gabor.
Concerts and exhibitions followed in many parts of Europe. His appearance in the Royal Albert Hall of London was unforgettable.
Some of the scheduled concerts were maintained while others had to be cancelled for health reasons: a lung infection and phlebitis forced the singer to a period of rest and diet. He then had to be hospitalized in the “Villa Giulia” clinic in Rome, where he died of stroke in October 7th 1959. He was only 38 years old!
On the whole Mario Lanza made 150 concerts in the world.
Mario Lanza has millions of fans, passionate and enthusiastic, that remember with religious devotion his memorable interpretations. In the world there are still many clubs named after him, while in Philadelphia a park and a museum were dedicated to his memory.

There is for him a sort of veneration that resembles a cult. Various artists have painted his portrait, and a member of the “Lanza Club” in Budapest, Rosa Villam, made his sculpture.
“He was a really fascinating young man with the most seducing voice, always warm and fresh.”
He didn’t have an easy personality: he’d blow off and then would have a streak of unlimited generosity and was yet easily irritable, ever changing; an always nervous show-off. And there was somehow something different about him. It was an enormous loss that he left this world so soon.” This is what Mario Lanza’s brother in-law John Hicks wrote about him in 1976.
There are anecdotes and myths about the singer, embracing every part of his short life.
Lanza’s father, Antonio Cocozza, was a multi-decorated veteran of the 1st World War and lived on a total disability pension. His mother worked as a seamstress for the army. One of the biggest pleasures of “papa” Cocozza was listening to an immense Caruso record collection. He remembered that at seven years of age little Freddie (that’s how Mario Lanza was called before he took his mother’s maiden name) played for 27 times one of the records on the gramophone.

At barely ten, he knew by heart many tracks from Caruso’s record repertoire. But it was only when he finished high school that he became serious about singing, taking lessons from Irene Williams and perfecting himself at the Tangle wood Berkshire Festival in Massachusetts. A further studying period with Enrico Rosati and Grant Garnell led him to begin an English Bohemian tournèe.
When Lanza sung at the Chicago Grant Park, a fifty thousand people audience was present. The critics were enthusiastic:
“Lanza was born to sing” all agreed. The next night the audience reached seventy thousand people in spite of rain.

A little over a month of the great success in Chicago, a triumph followed in Hollywood, triumph that induced Louise B. Mayer from MGM to have Lanza sign a seven year contract which gave him six months off per year for concert tours out of the movie industry. In this way he made his debut in 1949 in “The Midnight Kiss” playing the part of a truck driver/singer.
It was during the film “The Great Caruso”, made in 1951, that Lanza was able to make an exhibition of 15 solos of his favorite hero, his fame reached such incredible popularity, he was called “Caruso’s copy”.
I would like to add a thing or two about the discussions risen between critics and purists of the lyric song who’ve never wanted to include Mario Lanza in the golden album of Lyrics. I am well aware of the difference between a theatre voice and a camera voice (I have worked in the business having studied and sung lyrics for about 16 years and have listened live great singers both in theater and in camera). A perfect example of theatre voices in the tenor field, (to name only a few) are: Enrico Caruso, Giacomo Lauri Volpi, Mario del Monaco e Franco Corelli.
Mario Lanza’s voice cannot be compared in any way to the great lyricists, simply because Lanza’s voice was unique, beautiful. In synthesis, Mario Lanza’s characteristics were:

“Enormous ease to emit sound in any vocal tone of the pentagram, natural and spontaneous phrasing typical of great voices, great respiratory capacity accompanied to a complete extension and to a C diesis over the lines.”
Sometimes (to be purist) Mario Lanza can be blamed of mispronouncing parts of Italian opera, while in all parts sung in English he can be blamed of nothing. I think Mario Lanza should be placed out of every possible comparison or critic because his voice immediately awed his public.
For over 50 years those who listen to Mario’s voice understand they are listening to something extraordinary and unconventional, and marvel and admire this unique expression.
Art is something that can’t be measured or touched. It is like watching a work of art or a breathtaking sunset and try to quantify it
The public gives the most valid judgment, and Mario Lanza has won in every aspect. His voice brings joy to listeners around the globe.
I’ve listened and agreed on a recent TV interview to Luciano Pavarotti who defined Mario Lanza a pillar in lyrics around the world. Why? Luciano said simply: “Through Mario Lanza’s voice, records and films millions of people have come to contact with the world of lyrics and have come to know opera”.
I add: “All the music Mario Lanza has interpreted, including the new songs and written novels by Bodszky, Cahn, Romberg, Rodgers, Young, Lara” and why not Renato Raschel with his great and unforgettable “Arrivederci Roma”. 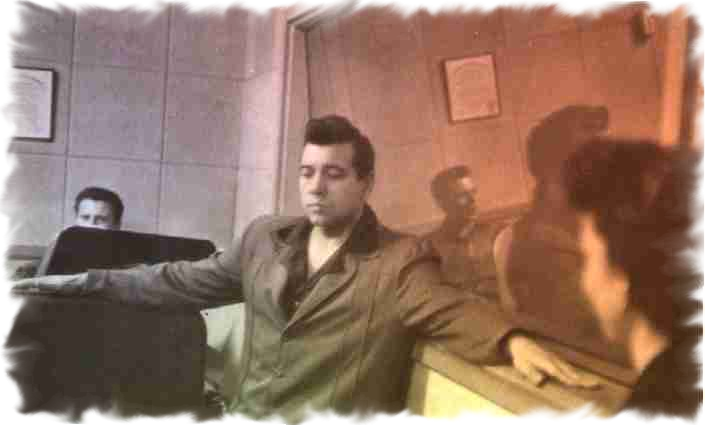 Mario while test: And This Is My Beloved
(Damon Lanza Productions