53 years after his death, Mario Lanza's voice is among the most loved and requested by millions of people, which proves itself immortal.
Many celebrations in his honor have been made around the world, by great singers of today, among which, Carreras, Domingo And Pavarotti. Who have been inspired by Mario's voice and have arrived to the scenes both as admirers and disciples.
On March 15 1994, José Carreras commemorated Mario Lanza at the Royal Albert Hall of London where Mario had had a concert with great success in 1958.
From the Carreras concert there is VHS Hi Fi stereo videotape:
Tape Teldec video 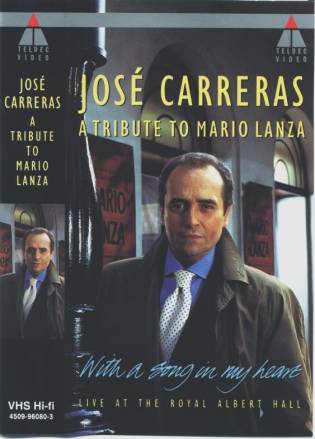 There are many websites dedicated to Mario Lanza; most of which are in English. I’ve therefore decided to give my own small contribution to the memory of the great tenor by making this web site in Italian, for all Italian-speaking people who love and wish to know Mario better. With this website I wish to reach particularly the new generations. Introducing them to Mario Lanza’s art and voice by indicating records and videotapes available today.
Many young people don’t know Mario Lanza or other great lyricist in general because their memory and its diffusion is of no interest to the media.
Fortunately Mario lived in a period in which there was the possibility to record audio and video to immortalize his voice and image with.
Navigating through the Internet I have seen that his films are being made into DVD.
To gather news about Mario Lanza’s life, I used a scanner to acquire images and comments from my extensive record library. I collect Mario’s record since I was six years old and I remember saving candy money my mother gave me to buy a Mario’s 45.
As an adult I have traveled quite often and purchased every record I could put my hands on, thus creating for myself an impressive record library of Mario Lanza, Mario del Monaco and many other great artists.
The fact that 45 years after his death millions of people still listen to his voice and read his story shows unequivocally that Mario has earned his place among the illustrious of all times. Today, with the digital technology, there is no risk of a deterioration of the “master recordings”, so his voice will become truly “immortal”.

This is his life

(Written by Benito Vassura, taken from the back flap of a 1979 LP)
Born January 31st, 1921 in Philadelphia, to a humble family of Italian immigrants, Mario Lanza dedicated himself to a wide variety of activities after he finished high school doing particularly well in sports. But it was not until he was nineteen years old that he started dedicating himself to singing by taking lessons from Irene Williams who, enthusiastic about his uncommonly gifted voice, had him meet with the famous orchestra director Serge Kowssevitzky. In that occasion Mario Lanza sung “Vesti La Giuba”, from Pagliacci. It is said that Koussevitzky exclaimed in awe:
“This is really an exceptional voice. You have to come with me to Berkshire.”
By Going to “Berkshire” he meant going to take perfection courses that were held annually at the Tangle Wood Festival in Massachusetts, where semiprofessional singers and musicians went to study, perfect and rest together. Lanza seriously applied himself to improve and refine his natural talents, and he was soon ready to exhibit himself in “Allegre Comari” by Windsor Di Nicolai. Critically acclaimed, the New York Times said:.
“He has a superb strength in his voice.”
Hired by RCA Victor, after his exhibition, Lanza had to interrupt momentarily his career to take care of his military obligations. Nevertheless, even during his military services, he had a chance to successfully exhibit himself in shows organized by the U.S. Air Force, “On the Beam” and “Winged Victory”.
A few months after his leave from service in 1945 he married Betty Hicks and moved to New York where he started a fortunate career substituting during the summer Jan Peerce in the radio transmission “Celanese Hour”. In the mean time, thanks to rich mentor Sam Weiler he continued perfecting his voice by taking lessons from the celebrated Enrico Rosati and the great Maestro Grant Garnell. This led him to a series of exhibitions and recitals, having great success especially at the Grant Park in Chicago.
“Mario” as his sister in law later told, “was known for his unbounded generosity. When he arrived at New York for the concert, Betty (his wife) was already here living with us. Lanza’s train ticket was already paid for and in his pocket he had one hundred dollars for any small expense that might come up during the short trip, but he had been so generous with tips that when he arrived home he didn’t have enough even for the taxi. Extravagance was part of his prodigy”.
“He would go buy the evening newspaper and would give the newspaper boy 10 dollars, one hundred if it was Christmas Eve. There were taxi drivers who became rich just by parking their car in front of his house waiting for him to come out.”
Lanzas’ activities became more frantic as he was also about to appear as a singer in a TV series with the famous producer Louis B. Mayer. The stress he was put through grew day by day.
After his debut in “That Midnight Kiss”, the next film was “The Toast of New Orleans” in 1950, where he sung “Be My Love”. Sammy Cahn, who had written the song with Nicholas Brodsky, was amazed by “the incredible brilliance in that voice that caused extreme reactions in those who listened to it”.
I was convinced that Lanza had in himself the capability of going from the softest tones to the most powerful ones”. And a New York Times critic added, “I would have never imagined what joy, listening Mario Lanza’s extraordinary tenor voice could bring”.
Since his childhood years Lanza idolized Caruso, and heatedly insisted that his next film be on his idol’s life. “The Great Caruso” was made in 1951 and gave Lanza the opportunity to sing 15 of his heroe’s solos, with such great success that he was nicknamed “Caruso’s emulation”, achieving a boom in the sales of his own records.
In 1952 Lanza made a new film “Because You’re Mine”. He actually did not sympathize with the films subject, had continuous humor changes and argued frequently with the producers, he was then addressed as “the bad boy of the movie industry”.
Still today, forty years after his death in Rome October 7th 1959 caused by a stroke, Mario Lanza is literally “venerated” by an unlimited amount of enthusiastic fans.
Many “Mario Lanza” fan clubs and web sites have emerged in many countries like England, Germany, US, Hungary, New Zealand, Australia and even Russia.
In Philadelphia, October 7th is considered the official “Mario Lanza Day”.
Listening to his voice still gives his fans great pleasure and his records are still among the best sellers in his category